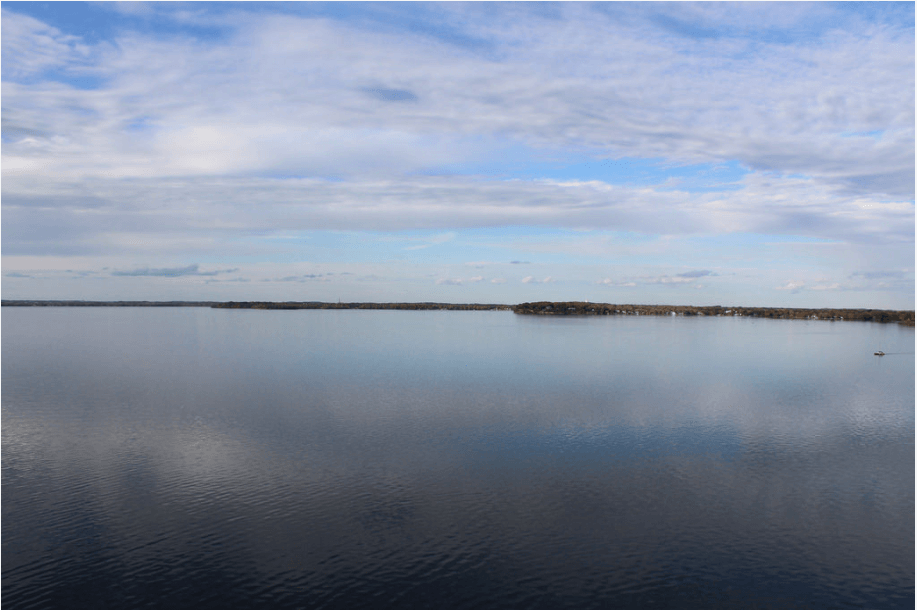 Until last fall, most folks knew Don Sanford as one of the pack of “water rats” who raced their sleek, wind-powered craft on the waves and ice of Madison’s lakes. But with the publication of a book 12 years in the making, Sanford took on an unlikely new role: keeper of the history and lore of Lake Mendota.

“I’ve always been a sailor, never a writer,” says Sanford, an agile-looking man with a grizzled beard and sea-grey eyes behind wire rim glasses. “When I started the project, the last thing I had written was in grad school back in 1974.” Yet he dove in, driven by knowledge that Lake Mendota was too often a mystery to the people who lived along its shores. “I’d pick up friends from the Memorial Union for a boat ride, and we would start cruising down the shoreline. Without fail, somebody who’d spent their whole life in Madison would say, ‘Where the hell are we? I don’t know what this place is.’ Whenever that happened,” Sanford recalls, “it always made me think that somebody— somebody else, that is—should produce a lake guide.”

The suggestion that Sanford should write that book didn’t surface until he and a few buddies embarked on a sailing trip to Lake Superior. “One of us had taken a job as a captain for Betty Lou Cruises on Lake Mendota, and he was telling stories about the lake as we were driving north. He ran out of stories about the time we reached Wausau, so I jumped in,” Sanford says. “Three hours later we reached Bayfield, and I was still talking.” Sanford’s friends insisted that he write his stories down, launching a voyage that would eventually become the full-color, lavishly illustrated On Fourth Lake: A Social History of Lake Mendota. The title, which comes from the early surveyors’ name for the northernmost lake in the chain, might sound dry, but the book is as entertaining as the place that inspired it.

Packed with geographic facts, anecdotes, misadventures, heroics, vintage photos, and historic maps, the 359-page volume offers glimpses of life on the lake through the ages—from the Native American cultures that first inhabited the lakeshore to Prohibition era hijinks when thirsty Madisonians drove their Model Ts across the frozen lake to imbibe at Westport’s thriving speakeasies. Along the way, you’ll learn about comings and goings of lakefront businesses, homes, and parks—as well as the people who built them. Like the lake itself, it’s a book you can dip into anywhere and find something that will surprise and delight. Organized spatially rather than chronologically, On Fourth Lake takes the reader on a visual cruise around Lake Mendota’s 26 miles of shoreline. “It’s split up into sections that you could cover in a couple of hours paddling in a canoe or kayak,” Sanford says. “I wanted it to be a practical guide as well as historical, so the book also covers hazards like rock bars and shallows,” he adds. “It’ll tell you where you can go get a good meal and a drink. And where you can anchor out and spend a night on the water, which is a wonderful thing that too few people do.”

The book’s diverse content gives it broad appeal: On Fourth Lake sells as well at University Book Store as it does at a bait shop and hardware stores. Sanford says his love of lake living began on the shores of Cazenovia Lake near Syracuse, New York, where he grew up. “It was a little lake—just a mile wide and five miles long—but it was a place of endless adventure for me. I think if you grow up on any body of water, you’re imprinted and drawn back to the water, just like a salmon always returns from the sea to its birthplace.”

After moving to Madison in 1976 to work at Wisconsin Public Television, Sanford again found his place among “water people,” racing sailboats in summer and iceboats in winter. He’s a member of the Four Lakes Ice Yacht Club, past commodore of the Mendota Yacht Club, and commodore of the International Nite Ice Yacht Class Association. He is also a boat captain for Betty Lou Cruises, the popular dining cruise line that plies Lakes Mendota and Monona. “Hanging out with all these lake people, I’d naturally hear lots of lake stories—so I felt like I already knew quite a bit when I started the book,” Sanford recalls. “When I started digging, trying to verify the information, I found out that the stories had gotten mixed up quite a bit. Usually, about three out of five facts were correct.”

Fortunately, Sanford worked only a block or so from the Wisconsin Historical Society. “I’d take a long lunch, walk over there, and start rooting around. That research lead to other collections—newspaper stories, scrap books, and old photo albums. I ended up building a database of between 7,000 and 8,000 items, all cataloged by location,” he says. A research project of this scope sounds even more daunting when Sanford mentions that he has attention deficit disorder. “Opening a card catalog is about the worst thing I can do; it makes me want to head off in a dozen different directions all at once,” he says ruefully. “But Barb, my wife, helped me catalog the information and the pieces gradually came together.” Sanford hopes that On Fourth Lake will inspire more people to literally immerse themselves in all that Madison’s lakes have to offer. “I want us to become a city of lake users rather than just lake viewers,” he asserts. “Yes, the Madison chain gives us magnificent scenery to see from our windows, but it’s so much better to be in or on a lake than just looking at it.” Getting out on the lake, he adds, offers a sense of liberty and self-sufficiency that’s a rarity in modern life.

In the introduction to On Fourth Lake, Sanford sums up his feelings: “It’s a place where we can cast off the burdens of everyday life each time we leave shore. A place where we’re free and ultimately responsible for ourselves and our safe return to shore…. A place where that perfect experience of a day on the water sticks with us through the long, cold winter until we can have our next perfect day.”