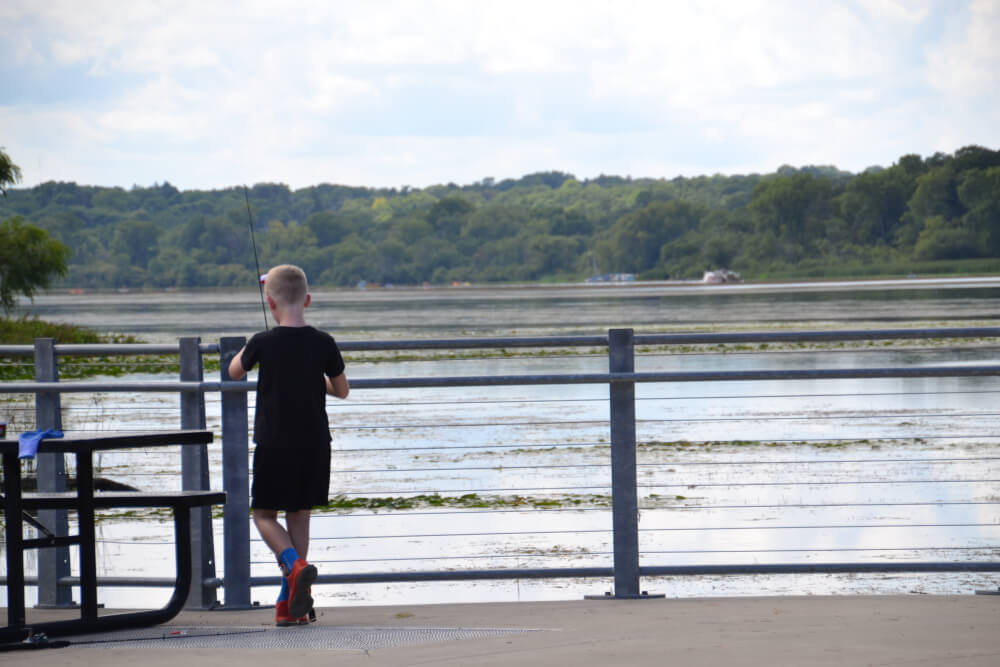 Carp are a freshwater fish species from the family Cyprinidae, a group of fish native to Europe and Asia. Carp are not new to Wisconsin; in fact, certain species have been living in our lakes since the 1890s! Despite their longtime presence, carp are still considered an invasive species with harmful impacts on native ecosystems.

How did they get here?

Believe it or not, common carp were actually brought intentionally into the U.S. by the Commission of Fish and Fisheries in the 1800s. Native to Europe, they were originally intended to be a game fish and source of food. Due to their ability to rapidly reproduce and tolerate a wide range of environments, they quickly spread into waterways throughout the country.

Are they in the Yahara Lakes?

The common carp can be found in all the Yahara lakes. They were intentionally introduced into our lakes in the 1890s. Despite various removal efforts, carp have spread and continue to disrupt natural areas throughout the watershed.

Why are common carp a problem?

Carp are notorious for altering natural ecosystems. They uproot and disturb submerged vegetation while searching for insect larvae to eat. Carp reduce water clarity and stir up bottom phosphorus-containing sediments, which contributes to algae blooms.

Common carp have a significant impact on water quality in the Yahara Lakes. as seen in a 2007 carp exclosure experiment in Lake Wingra. Note the dramatic contrast in water clarity between the carp-free zone and the rest of the lake, taken in the summer when blue-green algae is most abundant.

What is the Koi Herpes Virus?

The virus works by suppressing the fish’s immune system, making it highly vulnerable to other infections. It affects common carp and koi; fortunately, it is not harmful to humans, or any other animals outside the carp family.

How are we managing carp in our lakes?

Due to their long life cycles, lack of natural predators, and rapid breeding, carp eradication can be both difficult and expensive. In partnership with the Wisconsin DNR, local groups have organized carp harvests to remove these fish from our lakes. Using radio telemetry to track carp movement and large nets to collect the fish, 523,616 pounds (256.8 tons) of fish have been removed from the lakes since 2008. Clean Lakes Alliance has been active in financially supporting these efforts.

Are carp safe to eat?

Carp can in fact be eaten! They have been used as a source of food throughout Europe for centuries, and were initially brought to America to serve the same purpose. Carp have developed a reputation as an unsavory fish in America, with people often preferring more well-known species.

Carp that inhabit certain Wisconsin waters may be contaminated with high levels of polychlorinated biphenyls (PCBs). PCBs are highly toxic industrial compounds which can build up in the fatty tissue of fish and pose serious health risks. To ensure that you are consuming carp and other fish in a healthy manner, please review the DNR guidelines.

Are there any alternative uses for harvested carp?

Yes! It turns out that carp can be used as an organic fertilizer! Private companies located throughout the Mississippi River basin have begun to aid in carp removal efforts by using the fish to make organic liquid fish fertilizer.

What can I do?

If you find dead carp on your property, remove the carcasses, which can be put in a dumpster, composted or buried for disposal. Wear protective gloves when handling to avoid contact with harmful bacteria.

Remember, never move live organisms from one lake to another! Dispose of unwanted bait in the trash, not the water. Wash your boat and never drain water from your boat into waterways.

Asian carp are a non-native and invasive species of carp that are not currently found in the Yahara lakes. They are also a fish species from the  family Cyprinidae, a group of fish native to Europe and Asia. Flooding in the 1990s allowed this species to escape to the Mississippi river and migrate into the Wisconsin River.

Where do Asian Carp come from?

If you thought we learned our lesson from the invasion of common carp in the 1800s, think again. It turns out that Asian carp were also intentionally brought to the United States! These fish were imported into the Southern U.S. from Southeast Asia in the 1970s.

This time, the idea was to use Asian carp to manage the aquaculture and retention ponds of wastewater treatment facilities. However, flooding in the 1990s allowed these fish to escape into the Mississippi River and its surrounding waterways.

Are they in the Yahara Lakes?

The good news here is that Asian carp have yet to be found in the Yahara lakes. Individual fish have been found in the Wisconsin waters of the Mississippi River and Lower Wisconsin River. This does not mean we are out of the woods (or water, so to speak) when it comes to Asian carp. Since the Yahara watershed is part of the larger Mississippi drainage basin, we must proactively monitor the potential spread of Asian carp.

Why are Asian carp bad?

Asian carp eat a ton! Think of them as that friend that only saves you two slices of pizza and eats the rest all by themselves. Their voracious appetite leaves little food for native species, and they can significantly disrupt the local food chain.

Asian carp are filter-feeders that consume plankton and algae. They strip the water column of plankton, a crucial food source for many native species during their juvenile stages. They can feed on mollusks, which can disrupt native sturgeon and mussel populations.

What can I do?

If you catch an Asian carp species in Wisconsin waters, do not put it back in the water! The Wisconsin Department of Natural Resources asks that you take a picture of the fish, if possible, put the fish on ice, and bring it to your local DNR office.