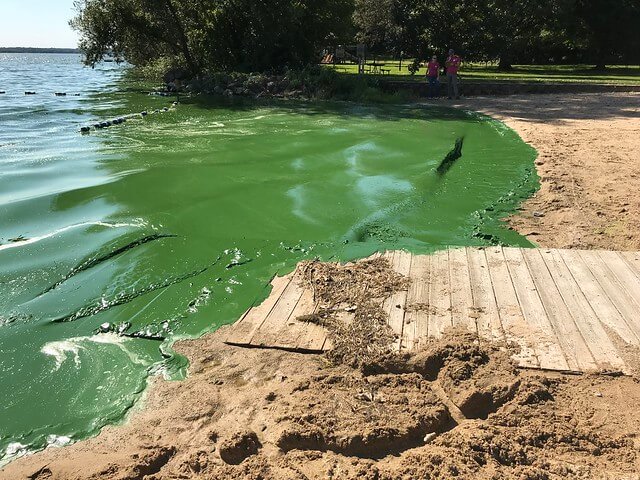 Understanding phosphorus and its connection to algal blooms

Reducing the flow of phosphorus into our lakes is one of the top priorities of Clean Lakes Alliance. Just one pound of this element can create 500 pounds of wet algae!

We know this formula now, but it took a long time for scientists to conclude that phosphorus is the main culprit of algal blooms. While a couple nutrients are responsible for algae growth, we now have concrete scientific evidence to prove that reducing phosphorus runoff is necessary for cleaner lakes. This evidence now serves as a guide to policy-making and shapes the way we view our relationship with lakes.

Our current understanding of phosphorus in lakes began in 1968 in Ontario, Canada. Throughout the 1960s, the United States and Canada experienced a large increase of algae blooms in the Great Lakes. The blooms caused ecological and economic damage to both countries. Without conclusive evidence as to the cause, strategies for solving the problem remained elusive. That is why the government of Canada established the Experimental Lake Area (ELA), tasking Dr. John Reubec Vallentyne with leading an investigation to try to discover some answers.

The ELA included 46 pristine lakes that had never been exposed to significant human-caused stress. Studying water samples taken from the lakes could not account for external factors, such as the atmosphere or surrounding forests, that might be linked to algal growth. Therefore, ELA scientists decided to intentionally pollute these lakes. Scientists introduced different ratios of suspected algae-producing ingredients (carbon, nitrogen, phosphorus) to evaluate their response.

Lake 226 was one of the first lakes to provide evidence of phosphorus as the primary cause of algae blooms. The study divided the lake into two test basins separated by an impermeable barrier. Scientists loaded one half of the lake with phosphorus, carbon, and nitrogen. The other basin received just carbon and nitrogen. Within weeks, it was obvious that the side of the lake with the phosphorus had significantly more algae than the side without the element.

With some biological rationale, Dr. Vallentyne and his team were able to reason that phosphorus was the largest contributing factor leading to the observed algal blooms. Algae needs carbon, nitrogen, and phosphorus in a certain ratio to grow. When one of these necessary ingredients is in short supply, it is referred to as a limiting factor.

The cyanobacteria (blue-green algae) that was able to grow on Lake 226 could pull in carbon and nitrogen from the atmosphere, but couldn’t do so with phosphorus. Because only the portion of the lake that received phosphorus generated algal blooms, scientists could conclude that phosphorus was the limiting factor. This means that it is the addition of phosphorus to lakes that creates the nutrient ratio necessary to grow algae.

This kind of scientific exploration has helped the public, local governments, and organizations, such as Clean Lakes Alliance, make more effective decisions in regards to lakes. The ELA has published hundreds of studies informing and inspiring politicians to become stronger advocates for healthy waters across the continent. In 2014, the International Institute for Sustainable Development (IISD) took control of the ELA. To this day, the IISD studies a broad range of topics such as lakes, microplastics, and climate change.

Read more about the International Institute for Sustainable Development.