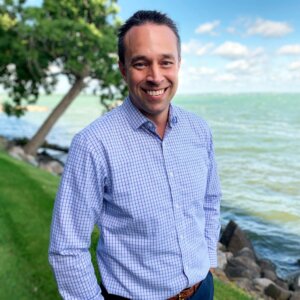 Prior to his work at Clean Lakes Alliance, Adam worked at Lands’ End for nearly eight years, and for six years as a TV reporter and anchor at CBS and NBC stations in Iowa.

Adam holds a degree in History (BSx01) from the University of Wisconsin-Madison. At Clean Lakes Alliance he works on event planning, donor relations, branding, and media relations.

As a student at UW, Adam lived in a house on Lake Mendota and used the lake as many days as possible. Today, he still sneaks out at lunch when he can for a run along the Lake Mendota Lakeshore Path, or the Lake Monona bike path.

Adam’s lived in Illinois, Minnesota, Iowa, and Wisconsin – Madison’s lakes help set it above many other Midwestern cities, making it a great place to live, work, and raise a family.