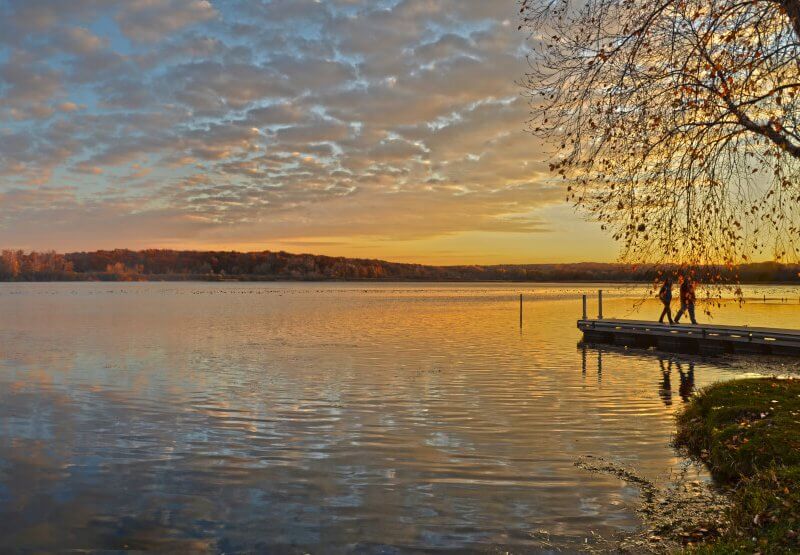 Beautiful sunsets, majestic sailboats, and shoreline views of the Wisconsin State Capitol are some of the more familiar and picturesque sights around the Yahara lakes. But what else can we see across these thriving and complex ecosystems? On your next walk around the lakes, keep your eyes peeled and you may spot a fascinating lake phenomenon.

Algae provide tremendous value to our freshwater ecosystems by producing oxygen and providing the base of the aquatic food web. However, green algae can grow problematically in our nutrient-rich lakes, and cyanobacteria (blue-green algae) blooms are of special concern because some species can produce potent toxins that are harmful to people and pets.

On the Yahara lakes, blooms can appear and disappear in a matter of hours or persist for days. Blooms can be pushed across the lake by winds or concentrated on shorelines by currents. Tracking blooms is a key objective of LakeForecast and Clean Lakes Alliance’s network of volunteer water quality monitors across all five lakes.

Infesting the Greater Madison lakes starting in 2015, this prolific invader deprives aquatic life of food and habitat and is a costly nuisance to boaters and swimmers. Zebra mussels stick to docks, boat hoists, and submerged rocks. They are are highly efficient at filtering food from water and can significantly deplete zooplankton populations. This filtering creates increased competition for fish that also rely on these food sources. Zebra mussels can reach densities as high as 700,000 per square meter.

Some of the more observant lake users may have been fortunate enough to spot a fascinating underwater lake phenomenon: bluegill nests. Every spring, warmer water prompts bluegill to seek the best areas to build defensive nests and protect their eggs from predators. Male bluegills plant themselves firmly above their newly constructed territory where they attract females and fend off the competition. Cruise the shores of Monona Bay in late May to catch a glimpse into the lifestyle of Wisconsin’s most common game fish.

Looking out across Lake Mendota on a windy day, you may be met with the image of some unexpectedly organized foam stretching in uninterrupted lines across the surface. You are seeing physics in action. Wind applies a shear force to the surface that creates small vertical rotating cells of water. When neighboring cells rotate in opposite directions, bubbles and debris get caught and are held in place by the resulting currents and produce this lake phenomenon. The process results in foam lines which are evidence of a process called Langmuir circulation.

It may not seem natural, but this shoreline foam is often a natural side effect of decomposing aquatic plants. Many dissolved organic compounds (DOCs) released from decaying plants are surfactants, similar to the soap we use every day. These surfactants allow air to mix with the water and form mats of foamy bubbles. Besides smelling a little “earthy,” this naturally occurring foam isn’t dangerous.

Unfortunately, this lake phenomenon can also be a sign of environmental pollution. Contaminants like per- and poly-fluoroalkyl substances (PFAS), recently found in high concentrations at Truax Field and in nearby Starkweather Creek, can cause foam to accumulate on the lakeshores.

PFAS-generated foam is typically bright white, lightweight, and sticky. Elevated PFAS contamination in Lake Monona via Starkweather Creek is a growing concern. The Wisconsin Department of Natural Resources (DNR) is closely monitoring PFAS in our lakes.

You may smell this particular sight before it catches your eye. This unfortunate, but often natural phenomenon occurs across many lakes. The most common cause of fish kills is lack of dissolved oxygen. Oxygen-hungry bacteria consume the much-needed oxygen when plants and algae decay. Particularly in shallow areas, fish are unable to avoid these localized “dead zones.”

Another familiar culprit is the ever prevalent Columnaris disease caused by infection from a specific bacterium, Flexibacter columnaris, that is naturally present in our lakes. Infected fish display unsightly cotton-like growths that are acutely fatal. The disease typically proliferates during the spring spawning season.

While the disease can be particularly problematic in aquariums and smaller lakes, Columnaris disease typically has minimal impact on the robust fish populations in the Yahara chain of lakes. It is important to report fish kills to local DNR officials, so they can rule out less benign causes like viruses, unknown bacterial infections, or unexpected toxins.

The title of “most obnoxious aquatic plant” easily goes to Eurasian watermilfoil (EWM) (Myriophyllum spicatum). The fast-growing aquatic plant is found submerged in still or slow-moving water across the Yahara chain of lakes. Native to Europe, Asia, and North Africa, the plant was able to travel here by clinging to boats and other water equipment from across the Atlantic.

Like most invasive species, EWM outcompetes the native vegetation because of a lack of native organisms that can consume or otherwise keep its growth in check. Excessive growth can block sunlight, reduce food sources for fish, and create poor recreational conditions for lake users.

As with all aquatic invasives, extra care should be taken when transporting boats and equipment between lakes. From the largest boats to the smallest kayak or set of waders, it is imperative to inspect and remove any aquatic hitchhikers to reduce the spread of invasive species.